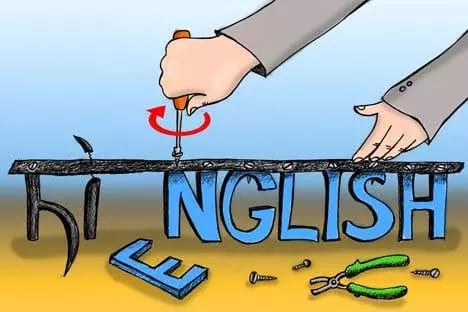 Language is a living, breathing organism.

Hinglish is a molten mixture of the English and Hindi languages that you encounter very commonly in India. English has been very widespread in India ever since the British Raj, of course, and remains a very common language in that area of the world. Most educated Indians speak English very well, and it has remained the language of the business, education, and technology sectors in that country.

Hindi is one of the official languages of the Republic of India, spoken by an estimated 260 million people. It’s not surprising that in a place such as India – where English is a necessary skill for success and Hindi is a common local language – that people would speak both languages, but the amazing thing is that it’s now almost universal in the area for people to speak a mixture of both languages referred to as Hinglish.

The language is basically a subconscious code-switching endeavour, with speakers freely mixing English words and sentences with Hindi (and even some other local languages). Most Hinglish speakers don’t even realize that they are switching back and forth – they are simply using the best words and phrases from each language to communicate their thoughts.

It’s estimated that native Hinglish speakers will outnumber English speakers in India very soon as the language spreads. In fact, British diplomats were recently officially instructed to learn Hinglish in order to be able to perform their duties in the country effectively. Films and songs have been written entirely in Hinglish.

Unlike other language mixtures involving English (for example, the Japanese phenomenon of Engrish), Hinglish is not an example of poor translation yielding humorous results, but rather a new dialect all its own that is perfectly understandable once you learn the base languages and know the rules. As it spreads it gains more and more cultural currency, and at this point it’s doubtful that any effort to discourage or curtail its growth would be successful.

Looking for an English to Hindi translation? Click here to get started