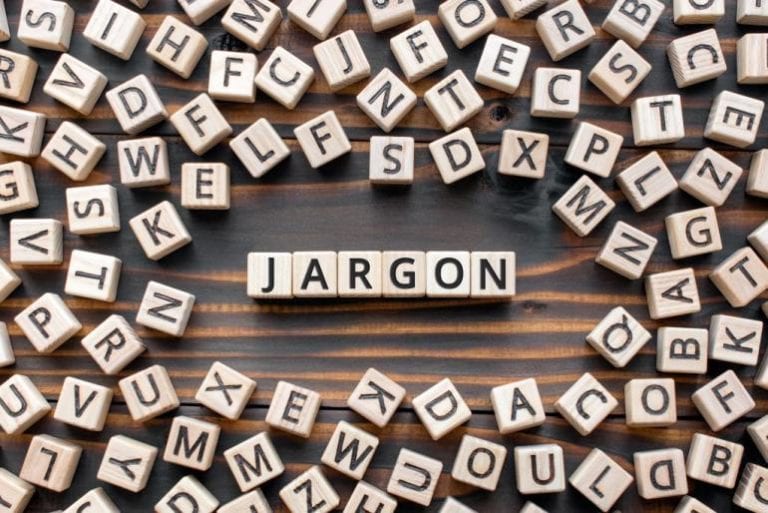 Usage of Jargon: When to Avoid It

Usage of Jargon: When to Avoid It

Jargon is powerful stuff – but it’s a double-edged sword. It can make the language more efficient, but in turn, it also makes it less accessible. You have to know how to use it effectively.

Jargon is simultaneously one of the greatest linguistic inventions of all time, and one of the worst.

As a translation services professional and all-around Word Nerd, I’m fascinated by jargon. Jargon is fundamentally a specific sub-set of vocabulary used by a group. For example, when a translation worker uses the phrase “translation memory” in front of a non-translation person, they’re using jargon: We’re the only people in the world who know what that is.

What’s fascinating about jargon is the dual nature of its purpose. On the one hand, it speeds up communication for the people in the know: Instead of having to come up with elaborate phrases that describe what translation memory is, my fellow professionals and I can simply use the phrase. On the other hand, it’s also obfuscating, designed to keep specific knowledge away from the uninitiated. Professionals are jealous of their knowledge – we worked very hard to acquire it, and nothing annoys us more than non-professionals who think they’ve gleaned enough knowledge to no longer need us.

Jargon has to be used sparingly, and with careful intent. Jargon can be a weapon to shield you from outsiders, which means it can also unintentionally make your text impenetrable. You have to consider the purpose of your writing.

For example, internal documents passed between the initiated may be more effective when jargon is used freely – everyone understands what’s being said. But a jargon-heavy sales website probably isn’t a good idea. Potential customers will be confused and intimidated by it, and will run as fast as they can from the wall of jargon you’ve erected.

The Joys of Jargon

Jargon can be a lot of fun, however. Back in the 1960s, ’70s, and ’80s, a huge volume of jargon was created by computer hackers and programmers, eventually collected into what’s known as “The Jargon File”. This fascinating text is not just a collection of fascinating terms for computers, programs, and other aspects of hacker and programmer culture, it’s also a lesson in how jargon can slowly be adopted by the wider world, in which case it stops being jargon.

For example, the term bandwidth started life as a technical term. Then became jargon for the capability of a network – and later the human brain – to process information. This term has crossed over into general use, and now decidedly non-technical people will use it freely in meetings to describe capacity.

The lesson here is that while jargon can be used defensively to exclude people, overuse of jargon can cause it to be adopted by the wider world, at which point it stops being jargon and simply becomes slang – and later, possibly, an official part of the vocabulary.

For the translation pro, jargon is a headache, just as it is for the customer. The difference is, we can’t surf to a different website – we have to figure it out.