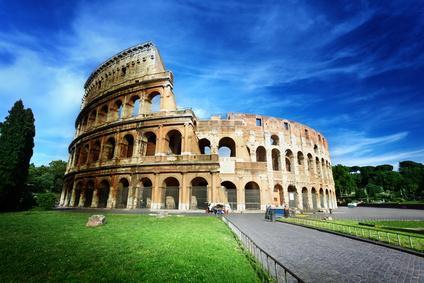 Latin may be an old language but it influences many modern languages.

The evolution of Latin into Italian is one reason for this. While the Roman Empire brought (and imposed) Latin onto many far-flung areas, once the empire began to contract and fail, Latin became corrupted by regional dialects, and so languages such as French or Spanish began to form as individual sets. Since Italy was the center of Roman civilization, Italian was the least corrupted descendent.

Of course, if you pick up a book on Latin you may not immediately see how close Italian is to that language. In ancient Rome there were two forms of Latin – the spoken, known as Vulgar Latin, and the written, known as Literary Latin (or, often, simply Latin).

The spoken version is what eventually evolved into Italian, and so reviewing written texts is often misleading when considering language evolution.

Similar but Not the Same

Of course, it’s misleading to think that Italian is very similar to Latin – if an Italian time-traveled back to the year 1, they would not be able to communicate beyond perhaps a word or two.

Italian has changed a great deal over the course of fifteen or sixteen centuries since it began to emerge as a distinct language. But it does share a great deal of vocabulary, still in the recognizable form to any Latin speaker. It also shares some technical translation points that other Romance languages have lost – Italian speakers still make a distinction between “short” and “long” consonants, a factor that most other Romance languages have done away with.

Italian also has far fewer word borrowings from Germanic languages; the barbarian tribes the Roman Empire pushed up against on its frontiers had a tremendous impact on language development once the Roman armies were removed.

For Italian, Latin remains its most distinct alma mater, or “dear mother.” If you truly wish to understand the living language of Italian, you must first spend some time with a dead language.